The error heading is "no target device found"

Can't see my tag in Logcat

See second box from the left on the top of the Logcat. It is the name of the process (to the right of the debugged app name).

After the error, don't press on a phone "close the app" immediately. Otherwise I will not see the error in the log.

SHA-1 key does not match between our key, Firebase and Google Cloud Console

SHA-1 keys should match in the following sources:

Value from the output of ./gradlew signingReport (local machine keystore) is different than in other sources

In 2 words, add new local SHA-1 key from gradlew report to the Firebase Console.
First, need to get local SHA-1 key by either one of the following ways:
1) Via the terminal. It does not work always though (see the second way infra then).
In the terminal, go to project folder and run:
./gradlew signingReport
The output will be something like that:

2) Via the Android Studio.
The best way is provided with this stackoverflow answer:
- In the Android Studio, open Gradle window via View -> Tool Windows -> Gradle.
- Click on "Execute Gradle Task" button (it looks like an elephant in the top left corner)
- On the new open window, press type "gradle signingreport" without quotes and press Enter.
- See the result in the Run window (View -> Tool Windows -> Run).

Once I had a problem when debugging and deploying the app from the new computer. So Android Studio changed the SHA-1 key. Now it doesn't match SHAs from Firebase Console and Google Cloud Console.

Just in case, let's recreate this local SHA:
- Remove (rm -rf) the debug.keystore.lock from the $HOME/.android/ folder.
- Create new SHA-1. Gradle in Android Studio does it automatically when rebuilding the app. So in Android Studio we need to press Build -> Clean the project, then Build -> Rebuild the project.
- Download again google-services.json file from Firebase console.

Once we added SHA-1 key to Firebase Console, Firebase will automatically populate it to the Google Cloud Console.

Probably the issue is in wrong SHA-1 key. So the idea is as follows. Once we create an app and test it via our local computer on our local device (android phone) we generate SHA-1 debugging key (just for debugging, not for release). Later at the Google Cloud console and at Firebase console SHA-1 might need to be updated after launching the app to the production. That is because new SHA-1 production key is generated upon generating the signed apk package (which in turn we use to release the app to the Google play).
Once we update SHA-1 key in the app in Firebase console, it should populate automatically to Google Cloud Console. However, just to be sure we need to verify that at Google Cloud Console the right release key is propagated.
Finally, the problem with production for me was solved as follows..
Hierarchy of dependencies in Firebase Console is as follows: In Firebase we have one project, in the project we create one app, in the app we create many SHA-1 keys:
So in the Firebase Console, open the project -> Settings -> consequent app of the project. In the app, add all three SHA-1 supra that are not there yet by pressing "add fingerprint". No need to create another apps in the Firebase project. Just add all the SHA-1 keys to the same app.

Then download from Firebase Console new google-services.json file to the app's code. Make a signed release again and upload in to Google Play Console again, now it should work.

SHA-1 key is from the old project

Once I deleted my project from Firebase, created a new one and used the old SHA-1 key. Google doesn't allow to do it because it takes up to 1 month for the old project to be completely dismissed from the Google services. So we cannot use old SHA-1 key at that time. Need to create a new one. Credits to this stackoverflow answer.
On Linux, the old SHA-1 key is stored there: $HOME/.android/. So we can do the following:
- Merely remove (rm -rf) the debug.keystore.lock from the .android/ folder.
- Create new SHA-1. Gradle in Android Studio does it automatically when rebuilding the app. So in Android Studio we need to press Build -> Clean the project, then Build -> Rebuild the project.
- Download again google-services.json file from Firebase console.

SHA-1 key is not populated

That is just an idea to check. Infra web_client_id has problems to be populated. SHA-1 might have the same problems in within the app?

Value is not populated

Value is of string type

Google asks to paste "Web Application" type id, not the "Android" type. In the Google Cloud Console, we can see 2 apps. One is automatically created by Firebase when we create Firebase app for the Firebase project. Another one is created at the step of configuring Google API Console project.

Package name like "com.example.myproject" should match between the following:

Package name is from the old project

There is a known issue that SHA-1 key cannot be taken from the old project. So probably the same problem might occur here. So we need to change package name everywhere (local store, Firebase Console, Google Cloud Console). This solution has not been verified yet.

At Google Cloud Console, make sure that all the steps are for the proper project which is listed at the top of the web page in the drop down menu.

google-services.json file is not uploaded

After implementing any of the steps supra, we need to download google-services.json file again from the Firebase Console.

Could not set unknown property 'fragment_version' for object of type org.gradle.api.internal.artifacts.dsl.dependencies.DefaultDependencyHandler

The problem comes from the app level build.gradle file. See in the log the reference to the certain line of the file. It could be caused by using improper syntax of improper language. E. g. we declare variable with Kotlin keyword "var" instead of Groovy "def" that is needed for this particular build.gradle file.

That might be because we are calling findViewById from the fragment, not from the activity. So in the Fragment, we can use function of getView().findViewById(R.id.foo). All credits are to stackoverflow.
Also in the fragment's onCreateView function, we can call
override fun onCreateView(
inflater: LayoutInflater, container: ViewGroup?,
savedInstanceState: Bundle?
): View? {
val view = inflater.inflate(R.layout.my_fragment, container, false)
val signInButton: SignInButton? = view?.findViewById(R.id.my_button)
return view
}

This comes as a pop up message when I am trying to add Google sign in account in the Authentication options of Firebase Console for my project. 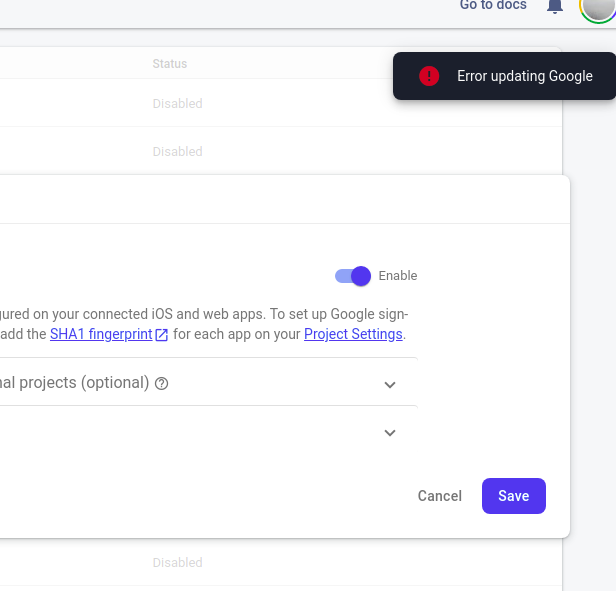 When Google sign in method is not enabled in Firebase, attempting to sign in via the app gives the following error in the app's log:
signInWithCredential:failure com.google.firebase.auth.FirebaseAuthException: The given sign-in provider is disabled for this Firebase project. Enable it in the Firebase console, under the sign-in method tab of the Auth section. [ The identity provider configuration is not found. ]
This error is rare and it seems like it is on the side of Firebase team, not us. Thus, the best bet is to contact Firebase support.

Some of the preliminary advises from support and stackoverflow include:
- Try to do the same from incognito mode, different browser, different device. Though Firebase customer service advice this to everybody who having such a problem, I know nobody for whom it worked :(
- Try to implement sign in with Google API Console without Firebase. In case of success, we will be 100 percent sure that the error is on the Firebase side.

Documented here also.
For me personally worked nuclear solution: recreate the Firebase and Google Cloud projects. The solution is costly if the Firebase project already has database. After deleting everything, first create a Firebase project. Than the Google Cloud project will be created automatically - no need to create a separate Google Cloud project.
After this nuclear explosion, don't forget to delete and create new SHA-1 and web_client_id keys:
- delete the debug.keystore
- run ./gradlew signingreport from the app's directory to make sure there are no keys remaining
- build the app in Android Studio - it will generate new keys automatically during new build
- run ./gradlew signingreport from the app's directory to make sure that new keys are there
The lesson for the future for me and others: loose coupling is a must when dealing with Google and Firebase. At any moment of time, we should be ready to easily switch from Firebase to adequate database. We should even be ready to switch from Google to other platform.

In my case, this error came while implementing FCM (Firebase Cloud Messaging) for the purpose of notifications on user's Android device. I am just following the official Google and Firebase guide, that directs to retrieve the token with the following Kotlin code:
Interestingly enough, their own project sample reference Firebase libraries in other way:
So if our code is written with Kotlin not with Java, we can use the working template from the sample supra. I. e. we call Firebase.messaging.getToken() instead of FirebaseMessaging.getInstance().token.
Finally, Android Studio suggested me to replace property access and for now in Kotlin the following code works fine:

Failed to authenticate, have you run firebase login?

I am following instructions for Firebase functions. I have successfuly login from my console, however when I am trying to deploy functions, terminal gives an error:

The difference is that you're running firebase login and then sudo firebase deploy. You should never need to use sudo with Firebase.
Source:
GitHub
StackOverflow

Probably, simultaneously with debugging some other app is running on the phone. That app could be in front of other apps, such as YouTube picture-in-picture option etc. Just close it for the time of debug.
Posted by Oleg at 9:47 PM