Appearance (theme) of the code editor and/or menus broke down:

Hardcode from stackoverflow, worked for me:

That is for the known bug of the "Arctic Fox" Android Studio release.
From here.
Rename the {path-of-android-studio}/lib/gson-2.7.jar file to gson-2.7.jar.disabled.
Restart Studio.

..that we saved beforehand to some safe place such as Google Drive

Uninstall and install the studio again

Find out where and how studio was installed:

- Go to the parent directory of Linux in terminal: cd ~

If it is in snap folder, commands for uninstalling and installing are simple:

Android Studio is based on Intellij which is kind of crap.

How to see location of the Android Studio settings

This is often needed when after having some problem with studio, we reinstall it, however the application takes the settings from the previous place (which is a different folder).
Solution: (how to find the default Android Studio settings directory): in Android Studio, press File -> Manage IDE settings -> Export Settings. It will show the path to the current settings directory.

Remove all the settings remained from previous installations in different folders other than installation directory. See also this from official Google.
Failed to install the following Android SDK packages as some licences have not been accepted
Credits to this solution:
In Android Studio click the consequence:
Tools
SDK Manager
"SDK Tools" horizontal tab
Android SDK Build-Tools
"Show Package Details" checkbox in the right bottom corner
Choose version, which is note in the error text (when I tried to build)
Mark it with galochka on the right\
Click "Apply"

Solution:
Make sure you have no uncommitted changes
Sync your local repository with remote github
Delete folder with the local repository
Clone the repository from github to local again
Open the cloned repository in the Android Studio
Build and run it again.

Selected directory is not valid home for Android SDK

Solution: Search "SDK" in the File->Settings.

In Android Studio go to File -> Settings -> Editor -> General -> Code Folding -> uncheck "Android String References". After reopening the file, string resources should not be previewed. Credits to this stackoverflow question.

How to disable double-shift keyboard shortcut

Press Ctrl+Shift+A and search for "Disable double modifier key shortcuts". Check it then.

Select device to run the app at: Alt+Shift+F11

Search keyword inside of files: Ctrl+Shift+F. Make sure that file mask (in the right top of the search window) is turned off, otherwise it will search not everywhere.

Editor layout: If the view is split into 2 parts, I can press the "B" key ("Select Design Surface")

Switch between file tabs to the next left/right tab: Alt+Shift+Left/Right

In the code editor, extra redundant indents are placed automatically

Or merely type "indent" in the Settings search box to find this section faster.

Turn off this checkbox. 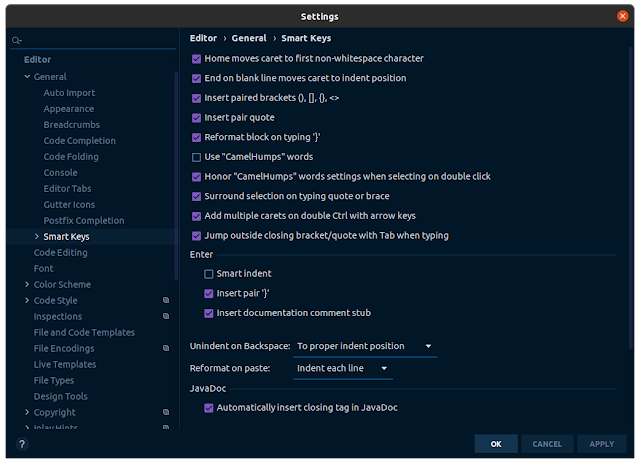